We arrived early on Thursday morning with the Carnival Vista and like the ship we will have two/three days in New York before we have to leave the Big Apple.  We hope to make the most of our limited time.

Thursday-November 3—New York City
It was a cloudy but pleasant day.  We debarked the Carnival Vista docked near midtown Manhattan about 8:00 am and we breezed off the ship and through U.S. customs.  We took a private car service to the hotel (twice the taxi cost-not worth it), but it was a quick door to door service and we were checking our bags by 8:30 am with the Warwick Hotel.  The Warwick is an old historic hotel built in 1926 by William Randolph Hearst and has had many prominent guests and residents over the years.  We refreshed at the hotel then we were off for the 10:00 am opening of the Met.  The Metropolitan Museum of Art is unbelievable, I’ve never visited anything more culturally spectacular.  We stayed for four+ hours visiting most of the exhibits and galleries.  My favorites were the historical American paintings, the European Impressionists, the Medieval Armory, the various Egyptian Collections, and the Sculpture court.  An amazing place.  We returned to the hotel, The Warwick, about 3:30 and checked into our room to relax a bit before our Broadway show tonight.  We had purchased advance ticket with our friends for the Musical show Kinky Boots for tonight so we walked down to the Theater District taking in the amazing sites of Times Square and the hustle bustle of New York City.  We arrived at the Hirschfeld Theatre for the 7:00 pm show and had great orchestra seats.  The show was very enjoyable and funny…nothing like a Broadway Show for entertainment.  After the show we stopped at Langan’s Pub & Restaurant and enjoyed a few beers and the bonus was I could watch the last half of the OU (class of '73) football game from our pub table.  Following a great evening we walked back to the hotel.

Thursday-November 3—New York City
It was a cooler day, but very bright with sunshine.  We began our day with a great breakfast at the famous Carnegie Deli only a few blocks from the hotel.  Our timing was good as we were seating right away.  I ordered the Mixed Grill Omelette with Corned Beef and DW a Grilled Swiss Cheese on Pumpernickel.  All very good.  By the time we left there was a line to enter the deli.  We walked down to Times Square to acquire theater tickets and we were successful…we will pick them up after 2:00 pm..  We walked back towards the hotel and stopped at the Top of the Rock for a trip to the top of Rockefeller Center.  Touristy thing to do, but the views were unbelievable…360° views of Manhattan Island sites and beyond.  We could easily view: the Empire State Building, Central Park, the Carnival Vista, Statue of Liberty, and much more.  We then went down to Rockefeller Center and viewed the famous Skating Rink and Rockefeller Plaza area.  Then it was across 5th Avenue to St. Patrick’s Cathedral where we were in time for a special service.  Following we walked along the famous Fifth Avenue Stores on the way back to the hotel.  We rested for a short while and about 3:00 pm walked over to Broadway Tickets to pick up our tickets for Something Rotten later tonight. I also had a Nathan's Hot Dog from a NYC street vendor...seemed to be the thing to do.  We then walked up to New York's Central Park where we took a tour of the park in a nice Pedi-cab (chose that over Horse Carriage as they cover larger area of park).  The trees were full of Fall color so the park was beautiful.  The tour covered the popular Central Park features including Bethesda Fountain Plaza, the Carousel, Alice in Wonderland, Balto statue, Conservatory Water (model boat sailings), and Strawberry Fields.  As agreed the pedi-cab took us most of the way back towards Times Square…saving my legs a lot of walking.  We now had time before the theater so what better way to spend it than at Sardi’s located next door to the theater.  We arrived early enough to get a table window in the upper bar and enjoyed some proper cocktails.  I had a few excellent Cosmopolitans and some bar snacks.  Show time at 8:00 so we went next door to the St. James Theatre where we have great seats front row mezzanine for the musical Something Rotten.  It was a hilarious musical, DW laughed out loud many times as did I. Another great New York Broadway show.

Thursday-November 3—New York City
It’s embarkation and sailing day for the Carnival Vista and also travel day for us.  We both are leaving New York.  The NY Marathon is tomorrow, but they had a 5K and 10K this morning and we got caught in some of it as we left the hotel this morning to travel to La Guardia airport.  We made it in fine time and were soon off to DFW then Waco and the drive to Bosque County. 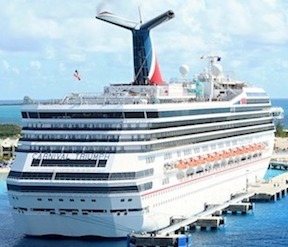