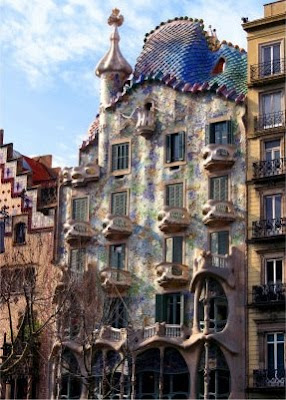 Barcelona, Spain 11/20/2009
Day 1--Friday--11/20
After a very long transatlantic flight from Houston to London and then a European flight we arrived at the Barcelona airport Friday afternoon. Barcelona is now the primary cruise ship port in Europe and will be the debarkation port for our B2B cruise on the Voyager of the Seas. We took a taxi (€25) from the airport to our hotel, the Gran Hotel Havana located at Gran Vía de les

Corts 647 in central Barcelona. The location is great, just 4+ blocks from Catalonia Square, the heart of Barcelona, and 6 blocks from Casa Batallo, the famous Gaudi designed house. You can walk to the Rambla or several nice restaurants. The room was small, but the bedding and pillows were fantastic and so comfortable. We wanted to stay awake as we knew if we napped it would be for a long time due to jet lag so we took a walk around the area and had light snacks and some ice crème. We visited the department store El Corte Ingles: The Largest Department Store in Barcelona. They have everything anyone may need or have forgotten to take on your trip. We bought diet Coke from the grocery department and some wine as well. We finished our walk around Catalonia Square before heading back to the hotel and we turned in early for a long restful nights sleep.

Day 2-Saturday-11/21
We had considered a day long tour as the Pulmantur office is located directly across from the hotel, but we slept until 9:30 and missed the departure time for all the tours. This sleep did take care of the jet lag though. We decided to strike out on our own so we headed towards Catalonia Square that is also the beginning of the famous La Rambla, a primarily pedestrian boulevard 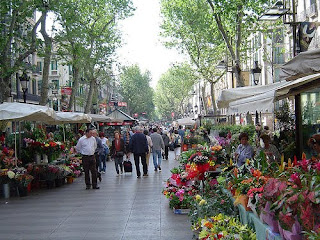 that goes from Catalonia Square to the Columbus Monument at the harbor. This was all it was advertised to be with shops, mimes, street performers, artists, and more. Just off the Rambla we visited the famous Barcelona Market. It was a site in itself with stalls of local fruits, vegetables, fish, meat, and flowers and Saturday seemed to be the day to visit. We then visited the Gothic Quarter with its small and narrow cobblestone streets with shops and stores. In this old area they have buildings built on top of the original Roman ruins. We visited the Barcelona Cathedral then mad our way back to the La Rambla. At the Port Veer area at the end of La Rambla we decided to take one of the famous Barcelona Hop-on and Hop-off tourist buses. Since the recent Olympics Barcelona has the most organized tourist buses in Europe. We spent the rest of the day on the bus and saw many of the Barcelona sites. It would really take two or three days or more to visit them all, but we had a good overview. We rode to the Catalonia Square stop and walked back to the hotel for some rest before dinner. We wanted to eat at Catalonia / Basque theme restaurant called Txapelas which we had seen near the Square and read about online. We had two pitchers of Sangria wine and sampled various Tapas for dinner. They had a nice menu in English with photos of the tapas so we tried all that looked or sounded good. It's a way to get a lot of variety of both hot and cold items. All were very good. We walked around and found the downtown team store for FCB or Football Club Barcelona the famous European Championship soccer team. I had to get a hat of course. We then walked back to the hotel for another great nights sleep.

Day 3 - Sunday - 11/22 (cruise debarkation day)
We slept as long as possible and the hotel said we could have a late check out so we walked over to view the Casa Batllo from the outside and get a diet coke from the McDonald's across the street. We just spent time in a sidewalk café soaking in the atmosphere of the city and that particular historical block. We walked back to the hotel to check out and got a taxi cab to the pier (€18) to begin our Euorpean Cruise.

Day 4 - Sunday - 11/29 (cruise debarkation & embarkation day)
We left the ship about 10:30 and treated the day as a port day in Barcelona. Our plan was to visit the famous Casa Batllo house designed by Antonio Gaudi. We took a bus from the pier to the 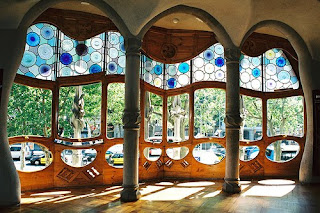 Barcelona harbor. This is the bottom of the famous La Rambla and we decided to walk and take in the activities, shops, mimes, and people on the Rambla. Arriving after a nice long walk we arrived at Casa Batllo and purchased admission (€16,50) that includes an audio explanation of the architecture and design of the various rooms. Casa Batllo is really a must for a tour to Barcelona. We continued our walk on to La Pedrera another building designed by Gaudi and also a museum. Here we just viewed the exterior, but visited their great bookstore. We are now a long way from the harbor so we began the journey back and at least it will be downhill. ;-) Having enjoyed eating there previously we stopped at Txapelas for Tapas and a pitcher of Sangria. Again it was very good. Now at Catalonia Square, the heart of Barcelona, and the top of La Rambla we again take the boulevard down to the harbor catch the bus to the cruise terminal.

Comments
We were both very impressed with Barcelona. It is a very clean city and very tourist oriented. The architecture is impressive and unique. There are lots of good museums, historical sites, and good food. We would love to return to Barcelona.
Posted by Snoozeman at 4:34 PM 1 comment: