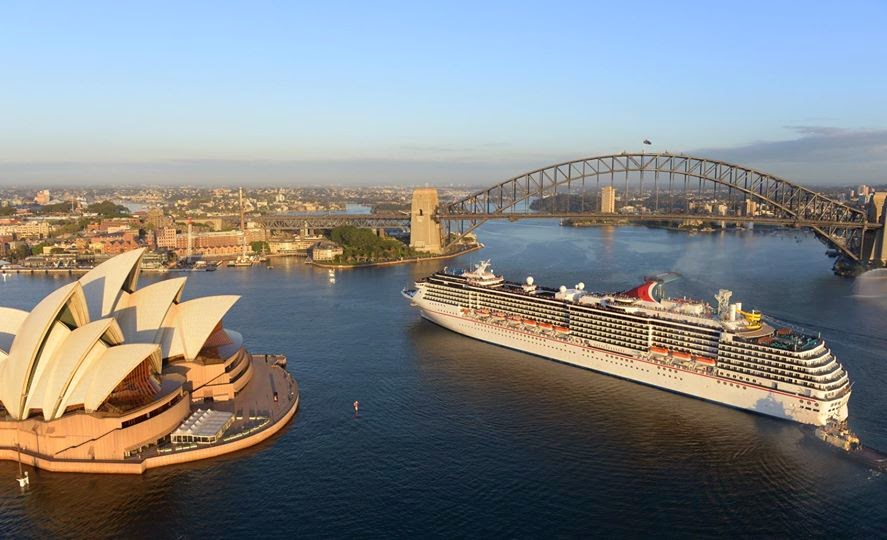 Sydney is the state capital of New South Wales and the most populous city in Australia and Oceania. It is located on Australia's south-east coast along the Tasman Sea and surrounding one of the world's largest natural harbors.

Monday September 22 / Sydney Australia
We arrived in Sydney harbor on the Carnival Legend early and anchored until daybreak as they were having a media event for our arrival. It’s a beautiful early spring day in Sydney. Since we had already gone through customs on board ship  the debark was very simple and since we were walking to our hotel and not requiring transport our group was passed strait through the terminal.  The six of us were all able to go the 4+ blocks with our bags. We all boooked The Russell Hotel, an old historic boutique hotel accommodation, actually had all three of our rooms available so we were able to drop our bags and begin our tour of Sydney strait away. The area in which we are staying is called The Rocks, the original and most historic area of old Sydney. We are in bit of a daze with all the sites in our view:  the iconic Sydney Opera House, the Sydney Harbor Bridge, the cruise pier with the Carnival Legend at dock, the skyscrapers of the Downtown Business District, and all the ferries coming & going in the beautiful harbor.  A most amazing site from the park just across from our hotel.  We walked the few blocks to Circular Quay and boarded Captain Cook’s Hop-on hop-off tour of Sydney Harbor.  We of course have the same views just described from the different perspective of the harbor.  Odd that we would spend 23 days on the Carnival Legend and the first thing we do is hop on a tourist ferry boat.  We sailed by Fort Denison and got off the ferry at Watson’s Bay and walked over to the internationally famous Doyle’s on the Beach, Sydney’s original seafood restaurant, for lunch.  It is premium priced, but it is the place to go and the seafood is very good.  The restaurant is very nice and you do have a beautiful view of Sydney harbor.  After lunch we walked through Gap Park to the South Head overlook.  This is one side of the entry into Sydney Harbor from the Pacific and it has very interesting views from the cliffs.    We caught the next hop-on hop-off ferry and continued our tour of Sydney Harbor.  We passed the Taronga Zoo, Luna Park, and Darling Harbor before returning to Circular Quay.  After some ice creme and listening to some didgeridoo music at the Quay we returned to the hotel for some rest and then all met for beer and drinks next door at Sydney’s oldest pub: the Fortune of War.  They have 15 beers on draught, I had a Toohey’s.  Since we had such a big lunch we actually just had light snacks and retired to the room to use the internet and watch local Television.  A room on land with wifi was appealing, a local TV news report on the arrival of the Carnival Legend was especially interesting when I saw our travel companions in the news report.  Cool.  A wonderful day in Sydney.

Tuesday September 23 / Sydney Australia, Blue Mountains
We had booked a very nice full day private tour for today so we were very pleased to have excellent weather, it had been raining in Sydney for two weeks before our arrival. We got a quick breakfast at the hotel then the Blue Diamond tour operator met us just after 7:00 am at our hotel. We have a nice small van that is easy to load and has a nice ride, much better than a bus tour.  Soon we were crossing the Sydney Harbor bridge and on our way towards the Blue Mountains.  Ian, our driver and guide, pointed out sites along the way and gave us the history of early Australian settlement in the area and development of the area towards the natural barrier of the mountains.  The views got better as we approached the mountains and after about an hour+ drive we were at our first photo stop overlooking the Jameison Valley.  This was a private overlook with no safety barriers so a little scary as it was a shear cliff drop off if you were to fall.  Nice view and great photo op location.  Next stop was inside the National Park at a small cafe where we had morning coffee, tea, and great scones.  Next stop was at Scenic World, the private park, where we rode the Skyway (3x), Railway, and Cableway.  From the Skyway you have a great view of  the three tiered Wentworth Falls and Jameison Valley.  The Railway is the steepest incline in the world and takes you down to the valley floor and a nature trail, it’s also the location of the original mines.  From the Valley floor you take the Cableway, the steepest in the southern hemisphere, back up to the top. I will say I was not expecting how steep the railway was…that drop is a doozy. It’s a beautiful park and touristy, but well worth the visit.  From here we saw several  other Blue Mountain viewing locations both in and outside the National Park area.  Final stop was at Echo Point for an excellent view of the Three Sisters outcropping.  We began our return towards Sydney and took our beer and lunch break along the way.  We had called in our order so our table and meal was ready in order to save time, our guide was keeping us ahead of the big tour buses who do a similar tour.  Our next stop was Sydney’s ultimate wildlife experience: Featherdale Wildlife Park.  We were ahead of the crowds so we went straight to the Koala bear station where you can interact with them and they take your photo with the bears.  Once we had our photos taken we saw the rest of Koala exhibit, they are so cute, you could spend your entire visit here.  We went to see the other 270 native Australian animals here including: Kookaburra birds, Kangaroos, Wallabys, Bilbys, Wombats, Tasmanian Devil, Echindnas, Dingos, and more.  It was a very enjoyable visit.  Once we left Featherdale we drove to a nice public park with a ferry dock where we boarded a ferry going down river to Sydney Bay and all the way to our Circular Quay.  I’m so glad we got a hotel in the Rocks area.  Upon return we bought beer and wine and enjoyed the rooftop terrace at our hotel. I had to try the beer 150 Lashes after hearing the history of it earlier today  (a convict was caught illegally brewing beer and received 150 lashes as punishment). Later some went to dinner, but we went for a walk in the Rocks area and just had a light snack before retiring.

Wednesday September 24 / Sydney Australia
I had the continental breakfast furnished by the hotel this morning.  The great weather is still with us.  One couple is leaving for home today, but four of us went for a walk into the central business district of Sydney this morning.  We looked at some shops including the old Post Office, some old arcades with shoppes, and retail shopping areas.  We ended up at Hyde Park where we saw the beautiful Archibald Fountain (of Apollo), War Memorial, and landscaping.  On the way back we walked through the beautifully restored Queen Victoria Building.  It has a very unique historical clock and this block long building with shoppes should not be missed.  We took a taxi back to the hotel and saw our friends off about noon.  We then walked to Sydney’s oldest licensed hotel and oldest pub brewery, the Lord Nelson Brewery Hotel.  Although brew pubs are now extremely popular, this one is over a hundred years old, not a new thing to them.  The building is fantastic with period and modern decor and located just above the old wharves.  Sailors were shang-highed from here in older times.  I ordered their Three Sheets beer and the gals had the pear cider.  I ordered the Meat Pie for lunch and it was very good and filling.  From here we took a taxi to the Darling Harbor area.  Located here are Restaurants, Tourist Attractions, the Maritime Museum, and Aquarium. We just walked around the pedestrian area and made a short visit to the Hard Rock so friends could get a T-shirt for their son.  We took a ferry from here back to Circular Quay.  Tonight we met a friend who works for Carnival and joining the Carnival Spirit on the next day for cocktails and dinner.  We met in the Push Wine Bar (ground floor of the Russell) and went to Löwenbräu Keller located in The Rocks just a few blocks away.  This is a German style restaurant with obviously great beer and the food was very good too.  We had a great evening celebrating Octoberfest Sydney style.  After dinner we went back to the hotel to prepare for leaving on Thursday.

Thursday September 25 / Sydney Australia, Travel Day
I again had the continental breakfast furnished by the hotel this morning and the great weather is changing.  We packed our bags, guessing on weight, and prepared to be picked up by the airport shuttle we arranged with the hotel ($50).  He was there a little early so we were on our way by 10:15 am and at the airport within 30 minutes.  We adjusted some weight between the three bags we checked at check in and all went well in security although they took DW’s scissors and some food items.  The rains now came and our departure was delayed just a bit, but we soon left on Qantas flight 7, a Boeing 777 direct to DFW in Texas.  We left about 2:00 pm on Thursday and arrived about 2:00 pm on Thursday, but it was a 15 hour flight.  Wish it was magic, but we have our day back.

Hotel
The Russell Hotel is a small historic boutique hotel, built in 1887, and located on George Street in The Rocks area of Sydney. We had room 19 located upstairs on level one.  It was a very clean large room with high ceiling, a courtyard we shared with friends room, en suite toilet and shower, flat screen TV, fast wifi, ceiling fan, and more.  Location was ideal.


Fun Things I Learned or Experienced

Highlights of my time in Sydney
Posted by Snoozeman at 2:42 AM No comments: