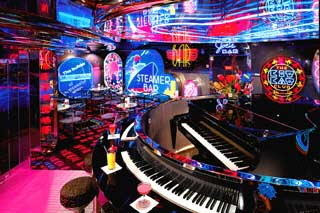 Ecstasy --November 13-20, 2006
This was a late booked cruise simply because of the good deal on a single 1A guarantee. This was my ninth Carnival cruise and second on the Ecstasy. The immediate good news was an upgrade to a 4A with a good amidship location.

Embarkation / Day 1. The day began as usual with a check of the Galveston port web cam. There was no Ecstasy to be found when she should have been already docked. She finally docked about 7:00 a.m. which isn’t too late. At least I knew she was in port before leaving home. The drive was fine and Houston traffic wasn’t too bad. I arrived at EZ Cruise about 11:30 a.m. I usually walk, but not having luggage tags took the shuttle in order to get tags from luggage area. If someone wants to book a late cruise guarantee, the process is fairly painless. This was my 4th time to have to pick up luggage tags. Although there were no huge lines the process was going very slow at check-in. More agents came at 12:30 and it went better. Usually no more than an hour from parking lot to lunch on Lido deck, but today took an hour and a half. A Rueben sandwich and salad to begin the day and both were very good. They have an excellent salad bar in the center of the Panorama Bar & Grill. Off for my first visit to my HQ, the Atrium Bar. Alex left the ship today so all new bartenders. All female. That’s all right, I won’t complain. Sail-Away special always the best drink of the day. One concern I have heard from some reviewers is that the muster drill interferes with the actual departure from Galveston. It does. I have sailed from Galveston many times so it’s not a great loss, but Galveston does have the dolphins which escort the ship out of the harbor. They really are fun to watch even if you have done so many times. You’d really have to hustle to see them and participate in the muster drill.

Checked bag came in good order, they seem to distribute the luggage well. Sampled the sushi bar and it was very good. The welcome show was very good. The new CD, Stuart Dunn, was good and refreshing. Not the same CD jokes. The comedian, Lewis Nixon was also very entertaining. I enjoyed the show and recommend it. I had hoped for 8:30 dinner, but got 8:00 pm as they had a singles/solo cruisers table at this seating. We ended up with a nice table for eight. Well dressed, well mannered, nice people. You always wonder how the luck of the draw will go especially when sailing solo. Dinner was good. The new menu with the “always available” section is now also on Ecstasy. The shrimp cocktail (you can order a double) is nice and filet mignon was very good. I have found the steaks hit or miss on CCL ships. This was a hit, I may order more steaks this week. A nightcap and off to the cabin to rest from the long day.

At Sea / Day 2. I always eat in the dining room for 1st breakfast and order the same items. Can get a feel for the food for the rest of the mornings by doing so. Almost late, but in under the wire of 10:00 a.m. Eggs benedict & french toast were good. I tried the special which was some type of baked eggs. Don’t recommend. Eggs on top of dish were barely cooked. I guess not enough oven. Today is a beautiful day so all the lido deck activities are going well. I signed up for the wine tasting which was at 12:30. The Matre’d promoted it at the previous nights dinner as a wine/cheese tasting and the cheese was the hook for me. I’ve done a wine tasting. When I went to the tasting it was JUST a wine tasting with some (very little) cheese, a lime, and a strawberry which were used during the tasting. Then they had the art auction guys hop up and take over the program. Almost a bait & switch in my opinion. Today was indian food day in the buffet. The mulligatawny soup was just OK, the poppadam was very good as were the sauces.

First seating of the Texas hold’em tables was this afternoon. I bought in at a low amount, but didn’t have near the luck as in September. Even had same seat and same table, the cards just didn’t fall for me. I do like the set up on Ecstasy best. The tables are in a nonsmoking area and away from the casino.

The Captains party was this evening and went well. Found a nice area with a nice cocktail waitress that kept us in plenty of drinks. Tipping (usually) helps keep you table filled with drinks. Formal dinner this evening and the lobster tail was very good. Disappointed by the pumpkin soup and VERY disappointed with the Bitter & Blanc. I’ve had it a dozen times since introduced with the new menus about a year ago and it was always the best dessert of the cruise. This was very dry, even dried-out. Actually it wasn’t as good last month on the Conquest, but I assumed it was just an off serving. This nights was even worse. I didn’t finish mine nor did others at my table. How they can take the best desert they had and change it is beyond me. Not going to let the desert disappoint the entire dinner though. The production show, Dream Voyage, after dinner was enjoyable. The dancers are good especially the ballet duo.

Progreso, Mexico / Day 3. My 4th time to Progreso so I’m not planning on going into town so it’s a nice day to sleep in which I did. I had an omelet from the omelet station which was good. A good time to use ship facilities since most people are off the ship. Played some mini-golf on the new course, swam in the pool including using the slide a few times. Also took a steam in the spa which is very refreshing. I didn’t visit the spa in September so I’ll note that the spa has also been refurbished and is very nice. Enjoyed a nice lunch in the Panorama Grill and they had the pistachio napoleons in the desert area. Very good, almost makes up for the B&B. I did get a chance to visit with the Matre’d during the day about the Bitter & Blanc. He’ll speak to the pastry chef. Also spent time at HQ, the Atrium Bar. Watched a few late arrivals board the ship which is always fun. Cozumel will be much better. Progreso is probably not a good place to be left behind. Dinner was good I chose the shrimp cocktail and steak from the alternative menu. Steak ordered medium-well but came well; however, the cut of meat was excellent. Matre’d came by to report about Bitter & Blanc. Tonight was amateur show so I skipped that and visited with new friends before retiring to cabin.

Cozumel, Mexico / Day 4. Arrived in Cozumel about 9:00 a.m. and did dock at the Punta Langosta pier along side the Fantasy. Began the day with breakfast in dining room and then prepared for trip to town. I was able to debark from crew gangway as it was just above my cabin and that gave me a good head start into San Migel. I was heading to the internet shop when I heard my friend Nelly call my name. Always nice to visit with Nelly. She owns the Mayan Pearl a nice jewelry store in Cozumel near the square. I got my internet business taken care of and waved at Martin, my barber, and headed down to the Forum for an early Mojito. Met friends at the square and spent an afternoon enjoying beer and Mariachi’s. We hired every mariachi group and soloist on the avenue. Back to the ship to watch the late arrivals stagger back. The welcome guest party was this evening and nice. Dinner was good. I again ordered the shrimp cocktail and steak. They served the grand mariner soufflé for desert. The production show was Ultimate Country and was a big crowd pleaser.

At Sea / Day 5. Final breakfast in dining room. Again everything is just a bit over cooked. The eggs benedict were hard. It was a beautiful day and a good time for Lido deck activities. Final Rueben sandwich for lunch. While on Lido deck I noticed the Splendour of the Seas pass us on her way to Cozumel. It is her first trip of the season from Galveston. She looked great. I went to Tea time which was held in the Neon bar and it was very good. The scones were excellent. Another visit to the steam room and final drinks from the atrium bar. A lot of things to do on the final day of the cruise. Dinner was very good, one of the better ones of the cruise. The Neptune Basket is becoming one of my favorites. It was excellent. I also had a shrimp cocktail & a steak. The desert was Baked Alaska. I retired to the cabin to pack and rest for an early debarkation.

Debarkation. The ship was an hour and a half late arriving in Galveston. Perhaps she couldn’t make up for leaving Cozumel late. I just waited in my cabin until they began calling specific decks for self-assist. It wasn’t too bad considering. I got to customs about 9:15 a.m. The Grand Princess had just docked for her 1st cruise of the season this morning. She also looked great. Walked to EZ Cruise parking and was on my way.

Cabin. I had cabin R150 an interior 4A. It’s not a quad so it didn’t have the large new furniture that my previous cabin had. Newly remodeled bathroom, new carpets, flat screen TV (no a/v hookups), and new chairs, stools and furnishings. The fan seems louder than I remember, but blowing well. In previous cabin it was the exhaust that made noise. Neither too bad as I usually have the TV on for background noise. Very near the amidships elevator and stairways. This cabin is great for a single or double. Cabin steward was named Butrous and he did a good job.

Food / Bar. I have already mentioned some specific problems. It seems everything is over cooked including: steaks, deserts, eggs, escargot, and other entrees. Consider this especially when ordering steaks, eggs, etc.. The deli sandwiches are very good as is the salad bar and desert station in the Panorama grill. Everyone at my table raved over the Warm Chocolate Melting Cake with ice cream on the side. It was a desert that was available every night and many ordered it on several nights. I thought the Bar Service was excellent. Friendly bartenders and cocktail waiters. Always seemed willing to help with special requests and were always willing to serve.

Ship. Again the ship is in great shape since the refit. Very clean and well maintained. I liked the CD, he did a good job. He could have stressed the importance of having a “free hand” if your using self-debarkation.

Overall another great cruise. I met a lot of very nice people, made some new friends and saw some old friends while onboard. I will be cruising the Ecstasy again.
Posted by Snoozeman at 11:11 AM No comments: