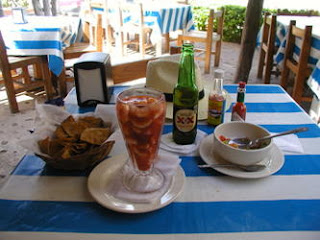 I wanted you to see a photo of the shrimp cocktail mentioned in my review. The hat was actually purchased at this same restarant a year earlier. A good place to visit when in Progreso is Saint Bonnet Ave. Malecon by Calle 78.
Posted by Snoozeman at 10:00 AM No comments: 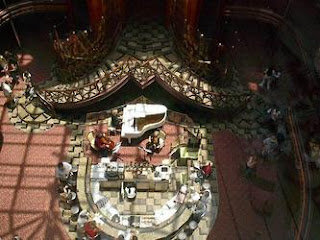 Elation November 14-19, 2005 One disappointment--Great Cruise
This was a spontaneous cruise. Booked on Friday for Monday departure. Wanted to go to Veracruz which was one of the scheduled two ports of call on 5-day cruise. Second time on Elation, 1st time last Xmas with DW & DD This cruise booked as a single. Very pleased with price which included single supplement and upgraded cabin. I was assigned cabin E-8. Two port holes and large.

Monday
Arrived at EZCruise Parking in Galveston about 11:30 a.m. and was taken to terminal. Embarkation was very smooth. They began boarding while I was in the line for check in so my timing was pretty good. I was on board by 12:30. Dropped carryon at cabin and went to Lido deck for lunch. Several Fun ship specials while rediscovering ship. Yes, I found the secret door. I didn’t know what to expect with dinner assignment having- very late seating, being solo, and late booking. I had a great table with 7 people all cruising solo. Two others had also booked on Friday. We had a good group. Imagination dinning room late seating. Waiter was Michael Hill. Very good service.

Tuesday
Fun day at sea. It was. Only disappointment was the announcement that we would not be going to Veracruz because of weather (a cold front). Very disappointed because that was the ONLY reason for the cruise for me personally. But how upset can you be when your on a cruise? Formal night: attended Captains welcome party. Used the CC tip of seating near waiters door and tipping well on 1st time the waiter comes by. He did not disappoint, he came by several times. We had 8:30 seating and most people left because of the 8:00 seating-we were just letting the room thin out and here come our waiter with a double round of drinks!!!--(post party) Thanks Captain Antonio Marchetti. Lobster night--’nuf said. Production show was Rhythm, a very good show.

Wednesday
Progreso, Mexico. This was my 3rd visit to Progreso so I had been to the area Mayan ruins, seen the flamingos, and was in Merida just a few weeks ago. Living on a ranch in a rural area I thought I would just treat it as a “day in town”. I went to the bank, the pharmacy, the barber shop (great haircut), the internet business ($1 for 1 hour), a few shops, and finally lunch. Having checked the email-there was one from J.Todd in Veracruz and he did mention bad weather coming, so I guess that confirmed what I had heard on the ship the day before. At the restaurant they remembered me as it was my 3rd visit. When I mentioned my disappointment about Veracruz, they brought me a shrimp cocktail ala Veracruz. It was very nice-for those who haven’t seen one it’s a very large shrimp cocktail-almost a meal in itself. Back to the ship for dinner. Tiramisu for desert tonight, don’t miss it, It’s great.

Thursday
Calica, Mexico. You could see the hurricane damage from the ship. Xcaret was within view and there was lots of noticeable damage. Taxi into town. More damage, but more than half the shops open. Senior Frogs along the beach--mostly gone. Most places on the beach were very heavily damaged. The further away from beach the more shops, bars, etc. were open. I wanted to take ferry just to see if San Migel was just as bad, but was convinced it was actually worse. I know they have worked very hard and it was fairly clean of debris, but there was construction and repairs everywhere. The only highlight I saw as I walked the beach was the beautiful topless sunbather. Highlight of the day actually. Watch out for the ‘pity sale’ . “Senior, senior, I have not sold anything since the hurricane. See the photo of my three daughters, please please you must buy something”. (yes I did buy something). Returned to ship early after purchasing some gifts. Pulled out of Calica into rough seas. Got rougher as we went. Either that cold front or TS Gamma. Not many at dinner tonight. Desert was Baked Alaska. Smaller production show, dancing cut short due to roll of ship. Did the piano bar. First time for that, but too smoky for me.

Friday
Fun day at Sea. Somewhat overcast and cooler today. Rough seas during morning and early afternoon. Most used this day to rest or read, as did I. One new thing for me was the Sushi Bar. One of my new friends encouraged me to try. I liked it. Especially with the wasabi. I can’t tell my friends back home about this though--it’s bait to them. Dinner was good. Best desert of the cruise was tonight--Grand Manier soufflé. (I think that’s what it’s called) Big production show called SPIN. Very good. The Elation dancers and the two feature singers are excellent. Better than the shows on the Conquest IMHO.

Saturday
Debarkation went smooth. I did early self and was on the sidewalk by 7:33 a.m. and off the island by 8:00 a.m.

Elation
Very clean ship!! Just as I remembered from last year, the unique feature of the Elation is the great showers. Larger than normal and the best water pressure of any ship I have sailed. There seemed to be more nonsmoking areas than in the past. Especially noticeable along Elation Way--much better. Larger casino than most. I love the lobby bar. It was on my deck and stocked my favorite imported beer. I will hate to lose the Elation, I wish It would stay and do the 4-5 day cruises and the Conquest the 7-day cruises from Galveston, but the Conquest and Ecstasy are fine.
Posted by Snoozeman at 9:47 AM 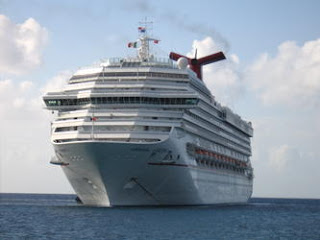 Cruising is a favorite pastime/hobby/holiday for me. It seems to be a perfect fit for myself and family. Since we live in a rural setting a cruise ship holiday provides: good food, entertainment, culture, travel, etc.. Some things that we may not be able to get at home. We are experienced cruisers, but now only cruise from Galveston or Houston as we no longer care to fly to a cruise port. Galveston is a nice drive from Bosque county and is easy to do--so we have begun to cruise again! Thanks to NCL who began the Texas trend with their Texaribean cruises.

This Blog is a collection of reviews I have written for various cruises in the Caribbean. Most of these were posted to Cruise Critics forums, but I wanted a place to collect them together.
Posted by Snoozeman at 5:06 AM No comments: